The (Im)Permanence of Paper: An Interview with Shigeru Ban 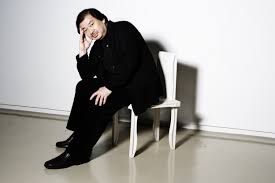 Impact Design Hub: You have built relief structures following many natural disasters around the world. Do different kinds of disasters require different responses? Or are people’s needs broadly the same everywhere, no matter the circumstances?
Shigeru Ban: For each situation, the appropriate solution is different. Whenever I receive a request for help, I always go to the area affected. I need to see and understand the local situation for myself — the local weather, local culture — and also find local factories that can potentially provide materials for the site. And I meet professors and students of architecture at the local university who can lend their help.
When I went to Turkey after the Izmit earthquake in 1999, a local architect told me that people would not accept structures made of paper. But in reality, people were afraid of aftershocks from the earthquake and slept in tents put up outside of the concrete buildings. So the Paper Log House, made from a light material like paper, was welcomed. More recently, in Nepal, traditional buildings made with brick were turned to rubble by the earthquake. Local people said they never wanted to live in a masonry house again. At the same time, in the field, I found out that the biggest problem was how to dispose of the rubble brick accumulated in the wreckage. So I designed an earthquake-resistant building by reusing the brick rubble with a wooden frame. The design employs a wooden frame as a main structure and uses the rubble simply as enclosure — the walls. This is a safer, and also easier way to obtain the materials.
It’s important to consider the local weather too. For the Paper Log House in Turkey, which was based on the Paper Log House in Kobe, I put shredded wastepaper inside the tubes along the walls and used fiberglass in the ceiling and also cardboard and plastic sheets for more insulation, depending the resident’s need, and according to the climate. Each community has different needs, that’s why I make a point of meeting with the local community to gather their input on what is actually needed and wanted. That’s how I designed the private spaces for women in the Islamic fishing village of Kirinda, Sri Lanka that was swept away in the Tsunami of 2004 — where we created places for them to retreat from the presence of male visitors even in temporary housing.

Impact Design Hub: You’ve revolutionized the use of materials, but the materials you use are actually very simple themselves. Do you see this is a strategy for dealing with the uncertainty of a world experiencing ecological transformation and geopolitical upheaval, or are you interested in seeking out novel materials to meet those challenges?
Shigeru Ban: I don’t think I am an ‘ecological’ architect. I don’t consider the environmental problem in my strategy. They often say that I was considering the relationship between architecture and the environment early on, but it’s a misunderstanding. I did not start using paper tubes or recycled paper in architecture because of the widespread rise in consciousness of environmental issues. I was simply thinking of how to use “weak” materials as they were, so that there wouldn’t be any waste.
My purpose in recycling the material as much as possible is to minimize waste. I’m interested in using “weak” materials like cardboard and paper as architectural materials. When designing a structure, I don’t start from the creation of a form. I extract potential problems from the subject and consider a design that can solve them. To solve the problems, I always look for the material I can find and use in the field so I don’t search nor need novel materials.

Impact Design Hub: What is the responsibility of architects to engage broader issues of social and environmental impact? Is it possible to separate the practice of architecture from social responsibility?
Shigeru Ban: I have continuously involved myself in disaster relief projects all over the world because I believe that architects should make use of their skills to improve society. The general clients for us are the persons who have power and money. On the other hand, I work for the victims of natural disasters with no design fee. But the level of energy invested and the satisfaction I gain from these two strands of work are equal. When I started doing disaster relief work, I thought “Separate them,” but now I work on the two challenges without any separation. For me, there is no difference between normal commissioned work and disaster relief projects. The importance of each project is the same.
Impact Design Hub: A single designer can only do so much to help populations adapting to sudden change. If there were one thing that governments and global agencies could do better (or differently) to help disaster relief on a larger scale, what would that be?
Shigeru Ban: Personally, I try to help those people excluded from government support, like the Vietnamese churchgoers who lived in plastic-sheet tents in the park after the Great Hanshin Earthquake in Kobe. That’s why I founded the Voluntary Architects’ Network (VAN) in 1995, an NGO that can work separately from the government. But sometimes, when I need administrative permission for construction, I appreciate when government officials show flexibility. For example, for the Onagawa Container Temporary Housing I designed after the Great East Japan Earthquake in 2011, the authorities were reluctant to give permission to use the container as housing because it was unprecedented. But the mayor of Onagawa City took responsibility and made the decision so that it could be realized.

Impact Design Hub: Projects of yours like the Cardboard Cathedral and the Kobe church blur the line between temporary and permanent. Do you think that in a world where so many people are displaced, and natural disasters are so frequent, we should broaden our definition of what “temporary” architecture can do and whom it can serve?
Shigeru Ban: Architecture, in my view, will gradually become impermanent. Environments are changing around us; we can work anywhere with only an internet connection, we have diverse means of transportation, and our way of life, such as living in the same place permanently, is surely changing. In such an age, there is no difference between temporary and permanent architecture. A concrete building can be impermanent — when a developer buys the site and destroys the building to replace it with another for the purpose of making money, for instance.
On the other hand, even something I intended as a temporary structure — like the Cardboard Cathedral in Christchurch, New Zealand, or the Paper church I made after the earthquake in Kobe in 1995 — can end up being permanent. The Cardboard Cathedral now remains permanently on site as a symbol of the city’s resilience. The Paper church in Kobe was relocated to Taomi Village, Taiwan in 2006 after they had an earthquake there. The same is true for the Container Temporary Housing in Onagawa. It was built in 2011 and it is still expected that residents will keep living there. In that sense, whether something becomes permanent or not isn’t decided by architectural materials. It’s really whether people come to love it or not that determines if it can become permanent or remains merely temporary.