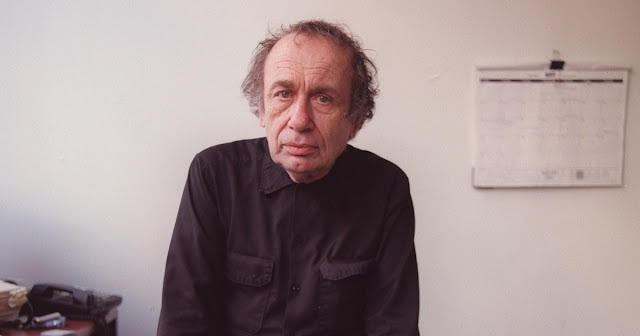 Artist and architect Vito Acconci died today from a stroke at the age of 77. For a little under two decades, Acconci produced strikingly original and impressionable art, before abandoning it for experimental architecture and design. Later in life, Acconci would say he hated the word “artist.” Last year, in a New York Times profile ahead of his 2016 retrospective at MoMA PS1, he looked back on his performance art years and remarked, “I didn’t really have anything to do with art.”
Acconci was born in 1940 in the Bronx, to an American mother and an Italian father. He resided in New York City most of his life, where he participated in the Downtown Manhattan art scene, founded his own architecture studio in 1988, and taught at both Brooklyn College and Pratt Institute. But before all that, in 1962, he briefly left to pursue an MFA in poetry at the University of Iowa. Besides writing a short story about a limbless character that would shock his classmates, Acconci would discover that he wanted words “to maybe be what they can’t be. I wanted words to be matter, to be material.” So he returned to Manhattan, where he’d make performance pieces that were corporeal and, some might say, a little invasive — in “Following Piece” (1969), he stalked passersby on the street until they reached a private space, and in his most famous piece, “Seedbed” (1972), he masturbated beneath a gallery floor for three weeks, eight hours a day, while voicing his fantasies of the visitors above him via a microphone.

But Acconci wouldn’t forget writing altogether; it continued to have a profound influence on his thinking. He particularly became immersed in the work of early feminist writers. “I started to feel embarrassed about being male,” he commented in a 2009 interview, “and it led me to make work where I could allow myself to be vulnerable.” In a performance piece, he burned off the hair on his chest and then attempted to form women’s breasts, but he ultimately concluded, “It’s not that simple to become a woman.”
Acconci’s audacious work drew protest as well as admiration — in 1983, his installation “Way Station I” at Middlebury College was pissed on, vandalized, and burned down. (In 2013, a second version was installed.) The installation comprised a metal shed with images of flags from the US, Soviet Union, Cuba, China, and the Palestine Liberation Organization; the structure’s panels read “GOD,” “MAN,” and “DOG” on the inside, and appeared as a series of playing cards from the outside.
“I don’t believe in universals. I don’t understand big words like God, truth, beauty,” said the Catholic-raised Acconci in an interview with Sam Jablon at BOMB. “But I do understand words like chair, floor, hand.” When you read or listen to Acconci on his work — which he spoke about eloquently — you’ll discover someone who was disinterested in the myth or higher power of art. “What I never wanted in art — and why I probably didn’t belong in art — was that I never wanted viewers,” he said. “I wanted an interaction.”

During the last 30 years of his career, he committed to making public spaces that were both utilitarian and playful. In 1992 he designed, together with Steven Holl, the façade of the Storefront for Art and Architecture, which consists of hinged panels that open out onto the street, collapsing the space between the sidewalk and gallery. Similarly, the water sculpture and walkway he designed for the Newtown Creek Wastewater Treatment Plant in Brooklyn extends from the interior to the exterior of the glass building. “From outside you sit inside the building, while from inside you sit outside — inside you sit next to a person outside, and vice versa,” Acconci described. More recently, in 2003, he built a steel bridge in the Austrian city of Graz that swells into the shape of a shell and hosts an amphitheater, playground, and café.

“I didn’t want to admit that I was a performer. A performer meant spotlights,” Acconci said of the time just before he abandoned performance art. But when he finally did decide to switch focus, “I left some kind of vestige of myself.” For many in the art world, it seemed as though his work had receded from view — it became “more like legend than fact,” as Randy Kennedy put in the New York Times. After all, the 2016 MoMA PS1 retrospective had been Acconci’s first in 30 years. But, in reality, he was purposefully extending his legacy in another direction.
Publicado por Blanca Oraa Moyua en 3:50