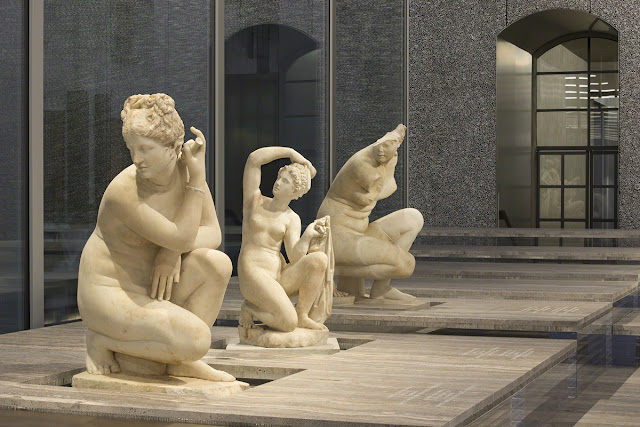 When the Fondazione Prada opened its doors to a new permanent home in Milan dedicated to contemporary culture, it not only placed the Italian city firmly at the forefront of today’s global art world, but also introduced an ambitious new way of thinking about the relationship between architecture and art. The location—an original 1910 distillery in a distinctly gritty part of the city—comprised seven spaces including warehouses and three enormous brewing cisterns with a raw industrial quality that the architects, Dutch firm OMA, retained while adding three new buildings made of glass, white concrete, and aluminum foam. One, the centrally located Podium, is intended for temporary shows, while another—still under construction—is a nine-story tower that will house the foundation’s archives, art installations, and a restaurant. The third, a theater with a mirrored facade, features folding walls that allow the building to open onto a courtyard. In total, the collection of buildings provides nearly 120,000 square feet of exhibition space, more than twice that of the new Whitney Museum of American Art.Metropolis correspondent Catherine Shaw visited the site with Pritzker Prize–winning architect Rem Koolhaas to find out more about the challenges of creating a new cultural paradigm.
Catherine Shaw: You’ve talked about this project “expanding” the repertoire of spatial technologies. Can you explain what you mean by this?
Rem Koolhaas: For a couple of years now,I have been ... well, I don’t know what the best word is, but it is somewhere between bored and irritated, by the current course of architecture forcing people to be extravagant even if they don’t want or need that. I think there is a fatigue with “originality” now and an interest in the modesty of an artist. In this case, this was important for me as it allowed us to find a new relationship with architecture. It was more interesting than saying “Prada” or “We are interested in strange new materials.”
I saw an opportunity to use preservation as an antidote to this, so I declared I would work on, investigate, and mobilize the potential of renovation as a kind of a countermovement. We have done this for a couple of years now. When we worked on the Hermitage Museum in St. Petersburg, we analyzed everything that existed and made a commitment not to add anything new but to simply reinterpret some of the buildings from that point of view.
We discovered that—in terms of size, intimacy, and also materials—existing architecture has so many conditions that, even if we wanted to, we couldn’t reproduce any more. It would be too expensive, and there are so many invisible rules now that didn’t exist before.
CS: But how is this “new”? Surely preservation has been part of the architect’s repertoire for some time now?
RK: Architecture in the past 20 years has been focused far too much on the expression of individual architects. The new Fondazione is not a preservation project and not new architecture. It is about respect for what was here. We started by analyzing what exists. There were a number of conditions and needs that were missing, so we added those into the new architecture. There are multiple levels to look into, and that is what we tried to do here; to mobilize the skill and the freedom and the steepness and the compression that is there and then add things that expand the repertoire so that we have a collection of spaces.
A lot of things here may look authentic, like the sequence of small rooms that become bigger in one of the galleries, but that was our intervention rather than a “found” situation, so we are also playing with the look of a found object. We actually intervened everywhere on that level.
We didn’t work with contrast, but, on the contrary, we tried to create a situation where old and new can work very seamlessly together, and are sometimes actually merged together so that you cannot tell at any one moment whether you are in a new or an old situation. That was our ambition: to create a kind of seamlessness.